A Madi Gras/Masquerade themed party highlighted our daughters 8th grade graduation party recently and being a good parent and wanting to document the event I forced myself to break out the white seamless and a couple of flashes. Yup, I forced myself….NOT….what better way to get some simple portrait time in, make people happy and add a few shots to the portfolio. A built in and willing crowd combined with some colorful attire created a wonderful environment for me to have some fun and the girl of honor as well! 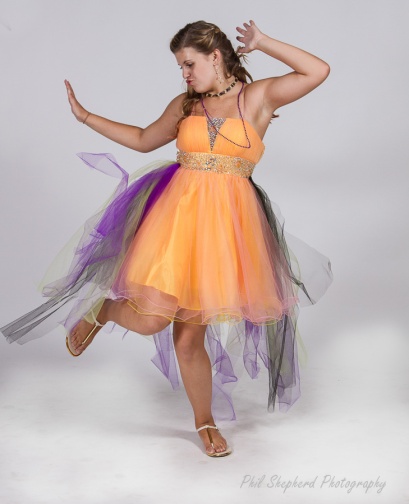 This was one of the first times I have ever used umbrellas to light with. I think maybe once or twice before to try it out but I have always relied on a beauty dish, softboxes, Flashbenders and/or grids. I did not have to worry about spill at all and the results turned out very clean…aside from footprints on the paper. The main as a shoot through and one bounced for fill.

I did not take any candids at all, the camera stayed with the tripod which was really nice. I did have a compact with me in case I went traveling but it never was used. Since I was a host I wanted everyone to have lots of fun. I must comment on how the proceedings got started for it is quite humorous. I was lying low, making sure no one felt pressured to have their picture taken, helping serve and replenish for the first one hour and forty-five minutes. We are talking almost half of the party. My Godson, who is 6 started showing me his camera, this progressed into sitting on the floor with him and helping him take pictures of the crowd dancing, which led to me showing him my camera that was set up across the room on a tripod, tethered to a laptop. He proceeded to stand by my side for the next two hours snapping away and he even had a little tripod with him! And without any prompting, as soon as I started showing him my gear the line formed!

Real Dance Moms. They smile, they are friendly and they like to have loads of fun!

A whole bunch of cuteness 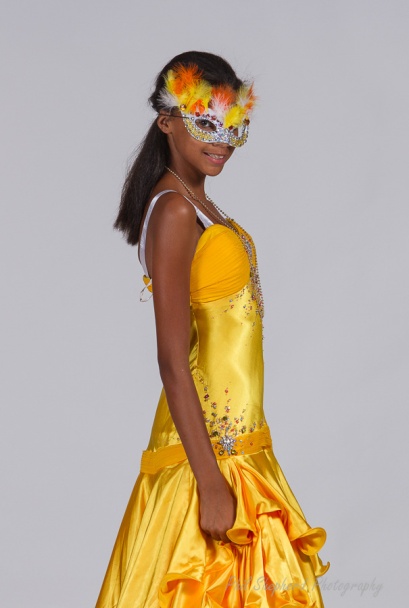 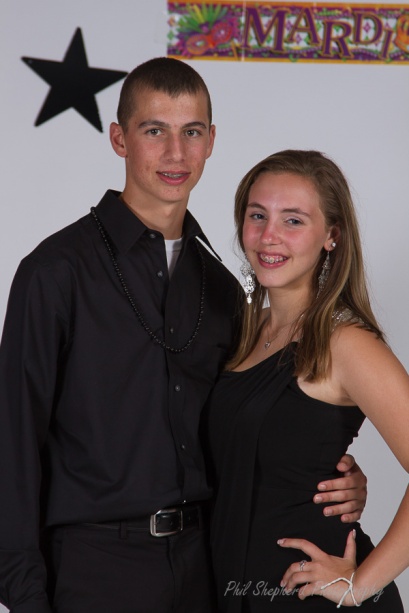 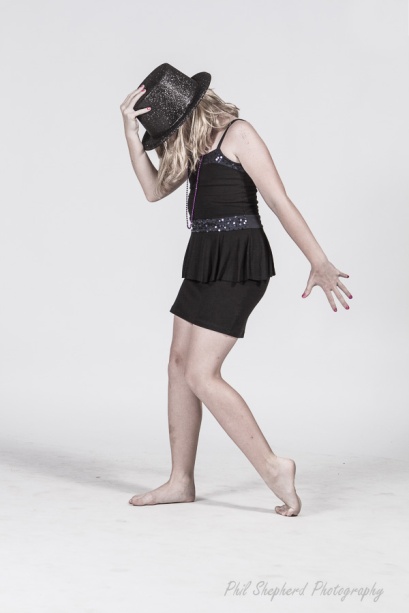 Going tethered worked out great. Allowing everyone to see the photos as they         were taken was a big hit, especially for the kids. Definitely something I will be trying to do more of with on location shoots that are stationary. And the umbrellas? Yes, I will   be utilizing this simple and very effective light modifier more in the future, though I still love my beauty dish.

Congratulations to all the graduates. And thank you everyone for a great time!

I wanted to take advantage of a day off and a minor decrease in temperature to give attention to some flowers that were in need of dead heading. The bed in which I was working are frequented by Bumblebees. Lots of them. They love the Cone Flowers. Every time I reached for a stem a bee landed right on top the flower, as if anticipating what the clippers were about to do, in order to get the last drop and spec of pollen left in the dying head. It was quite comical vying for space among the insects. I started feeling guilty taking away their food so I left a few piles for them until the new growth fills out…Just makes me wonder what they were thinking and if they were really doing this on purpose. Hey, you never know….. 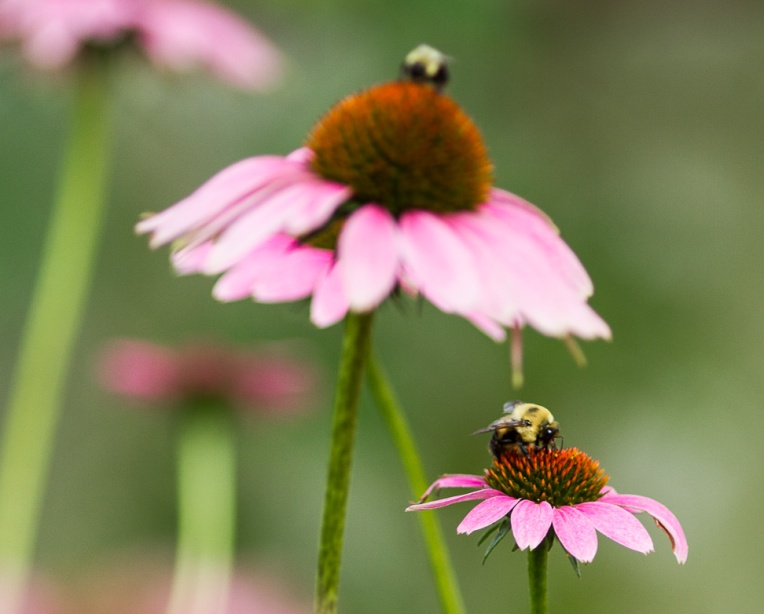 It is the tiniest ones that could hurt the most

And since camera was in hand and I paused to allow someone to build their home. 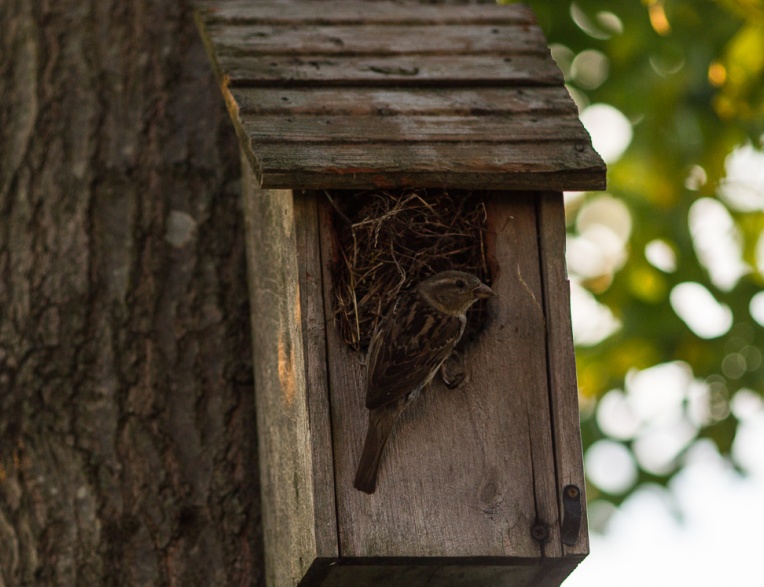 While this next capture has no birds or bees, I am liking the way it looks.

A quick one today, need to get back to my chores…

Thanks for stopping! Till next time

A three week whirlwind of dance has come to a close and with it the end of our dance season. The end of June was the annual recital beginning with dress rehearsals, 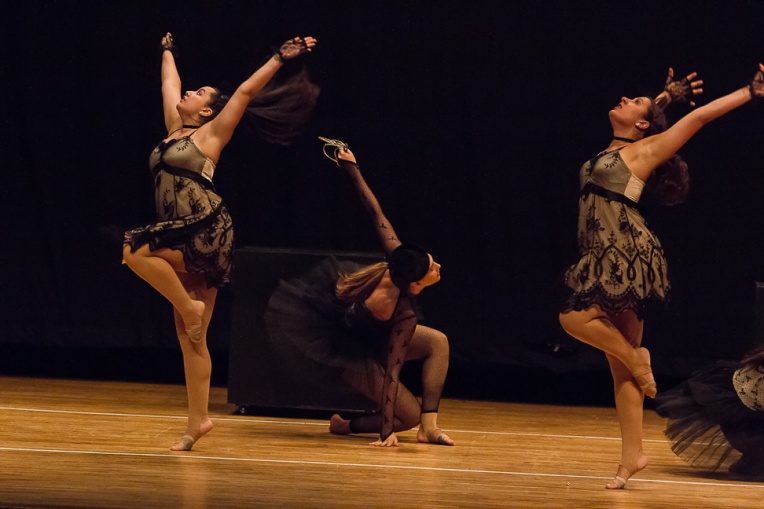 Followed a couple of days later with a weekend full of sold out recital performances,

A couple of rehearsals and lots of packing for the next week then off we went to Nationals in Ocean City MD. I was not able to take pictures during the national competition. This is a whole other story which I will be leaving alone, but as always the team was amazing and scored very well for all their routines!

During my downtime from being a dance dad I was of course chasing the light. I had intended to recruit some dancers for a sunrise shoot, but at this time of year the sun rises way too early for me to stick to such a request. 5 am wake up is not my idea of a good time during a week of no work, I can not imagine the girls wanting to do it on a day they had to dance. Nevertheless, I did manage to arise early enough on one day for an attempt at getting an Ocean City sunrise. Had a small problem with some clouds getting in the way thus eliminating 95% of the color; and this turned out to be the theme of the week for me for sunrise:

I am still on the hunt for an undisturbed sunset over the water photograph, being on the east coast I need bay views but by the end of the summer I hope to have what I am seeking. Not only did the sun hide during the color hours it did a bit of hiding during the midday hours as well!

This is a view down the strip on a very stormy day from our room on the 15th floor:

Friday was the final day for competition and after all responsibilities were taken care of, it was time to do a little sightseeing! First stop was the boardwalk section at the end of the island. Ocean City has two distinct sections in their two and a half mile long boardwalk. The classic and the modern. The classic section is your typical wooden planked boardwalk with arcades and shops, a bit run down looking, old if you will.

The modern section was more to my liking. While it also had your typical boardwalk retail stores it was upbeat and filled with some quite interesting looking and uniquely named shops.

One place that I feel I have visited all too often:

Quite tasty and recommended. An art gallery that took it to the extreme: 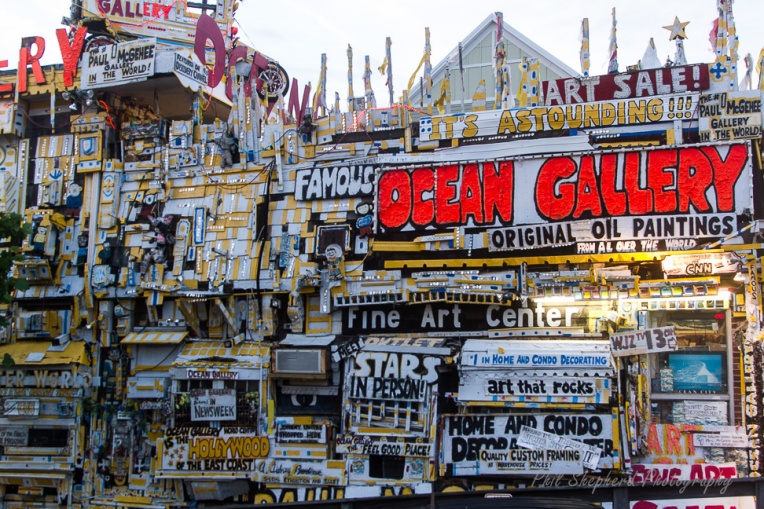 And some street performers that rocked! This dude is not only very talented he is also really funny and engages the crowd quite well. He can be found at The Reid Show:

and a few illustrative artists also were present. Our favorite artist was actually someone who uses spray paint for his pictures. We were blown away with this process and the resulting detail so we ended up purchasing one of his works. He can be found here, be sure and check out the videos. Good times.

The following day we made our way to Assateague Island to check out the wild horses:

There are about 105 of them on the island and we managed to come in contact with about 20 of them. They do not get spooked by humans but have been known to bite if you try to touch them. Just imagine the look on the face of a visitor when they pull into a trail head parking area and see this:

We saw one that was limping and asked a park ranger if they intervene at all. They will only intervene if an animal was injured by human interaction. If the horses fight and one gets hurt natural evolution is in play. Fair enough. This is definitely a place we will be visiting again to do some camping. Maybe we will even have a few visitors stop by for dinner…I was incredibly thrilled with some of the shots I captured of these magnificent creatures. Off to the printers we will be going.

We took a beach trail as well, did not see any horses on that one but came across a road (Baltimore Avenue) that was washed out in a 1962 Nor’easter and devastated the entire area as well. Much like Sandy did to the Jersey Shore last year. 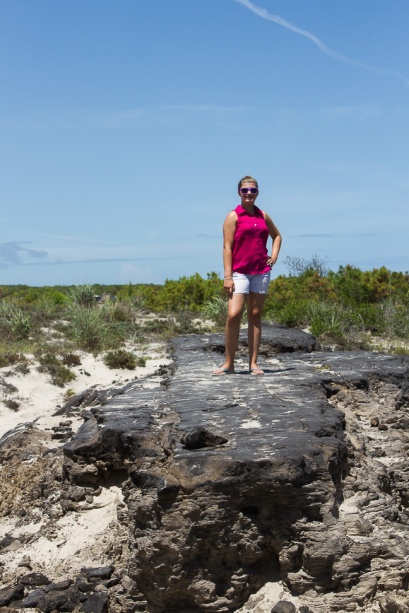 We met this little guy at the information center: 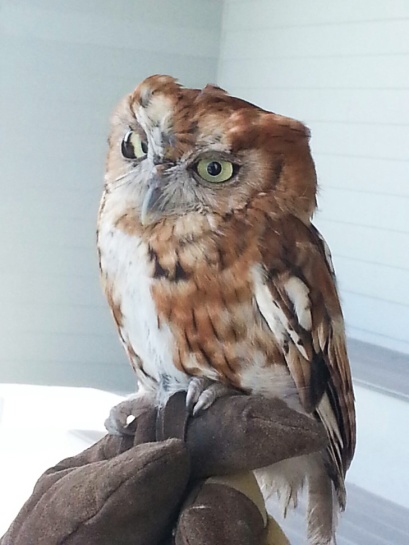 A day concluded, a wake up and a trip back home. Part of our short jaunt includes a ferry ride spanning a 17 mile channel from Delaware to New Jersey. I was hoping to have some Dolphin photos but they stayed out and away from the boat so I only was able to capture one as it was swimming. No jumps today…The jetty’s on the Delaware side are very nice aesthetically and I did manage to capture this image which eluded me on the way in.

Have a great summer, thanks for stopping by! Till next time…