Indiana had his adventures with a Crystal Skull and I have been eyeing up the one my wife received for Christmas, just waiting for it to be emptied of its tasty contents. I have been wanting to see how light reflects through it when it is empty as well as when it is full of liquid. A little experiment to satisfy my curiosity and to help me understand the effect of water as a diffusion device. It has been empty for a couple of weeks now, just waiting for me to make my move on it wondering what I had in store.

The Crystal Skull. Empty, its contents consumed by worthy adults. 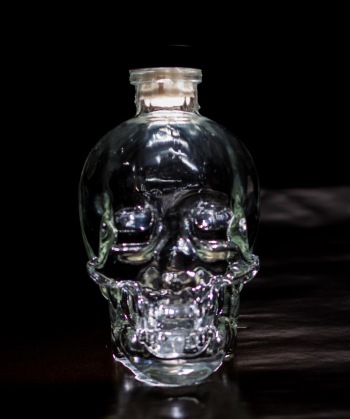 I finally decided to try my experiment out but it took motivation from another object to really get me going with this. A little get together, a nice fire and a warm house prompted  our guest to remove an article of clothing………… a sheer, fashionable scarf. WHAT WERE YOU THINKING!  While it was being folded I noticed it was see through……ding, ding, ding…diffusion device! Grabbed the camera, the scarf in between my lens and a vase of roses, SHABANG! Yes, I stole that word from a head shot photographer I follow. Seem to fit though. So, today the skull, my wife’s purple scarf (with black skulls on it no less) and I became acquainted.

Before we get to carried away, the original intent of this little project was to measure light refraction through glass, with and without water. The set up for these shots – an 85 1.8,  a glass end table, glossy black wrapping paper with a cut out of the base of the skull, a speedlite set at 1/4 power and zoomed to 105 mm and the Rogue Grid with the 45 degree head on. I also used some gels for added effect. The flash was placed on the ground, underneath the table and pointed of course, straight up.

I was not liking the look with the cap on so I removed it to decrease the bounce and to eliminate over cooking the top. So here is the empty skull without cap and a view of the cut out…..whoops. 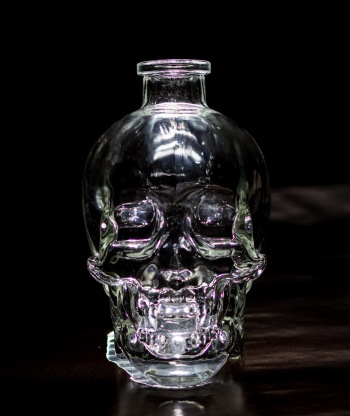 And full of water: 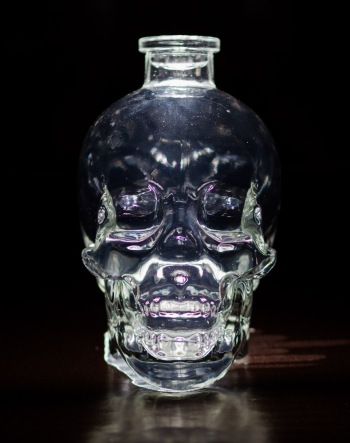 For overall appearance, I think I am liking the empty version better. The water does bring out certain facial features in the mouth and chin area and picks up the purple gel more but it dulls the top. It also carries the light through the hole in the top which is why I took the cap off. I bet a couple of drops of red food coloring would have been cool. Save that for another day.

Time to break out the scarf…..hung up on a stand about 8  inches in front of the skull. One more speedlite, through a 12″ octobox, was added overhead to assist in lighting the scarf. The skull was still full of water. 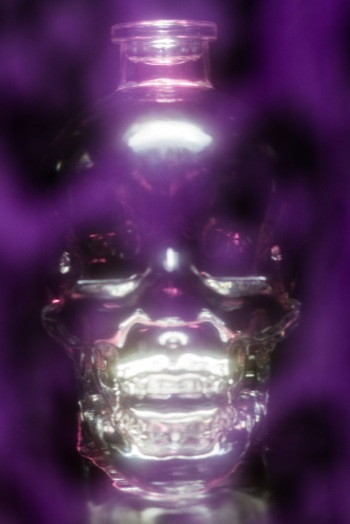 Good stuff. The water gets dumped, changed the gel to red and I do not remember what prompted me to try it with the cap on. The scarf was moved closer to the skull so I could get more…..skulls in the shot. 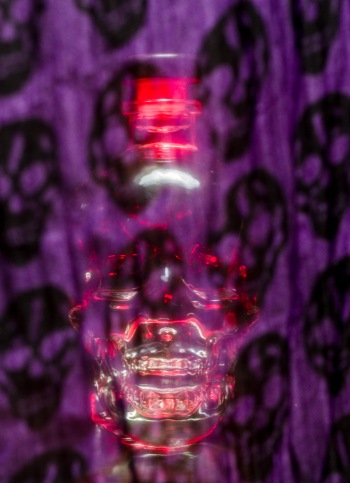 And with the cap off, I also moved up. 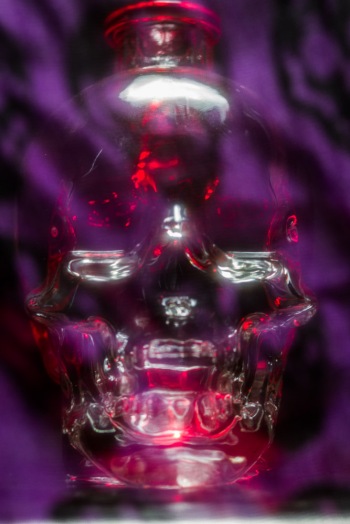 I think it is very interesting the way the gel is coming through. Looks like it is bouncing all over and not quite sure what little crevice to fill. I did the red gel a couple of days after  we got this, lots of liquid still in it and it filled the entire skull up. The difference in that shot is that is was straight through a glass base and not directed by a cut out.

My final shot in the sequence with the scarf was placing the scarf against my lens hood – very interesting results. Had to focus manually as well.

A very interesting and enlightening time with the scarf and the skull. And…..possibly feeling the effects of this crystal skull too much, I decided to change colors one more time and see if I could make a happy skull. Believe it or not, this is a Pink gel…… 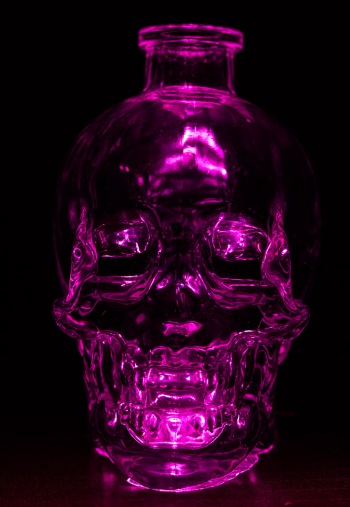 I hoped you enjoyed my little experiments. Thanks for stopping by!