I have been feeling a bit antsy lately, couped up inside, not to willing to go out and hang in the 30 and 40 degree f weather any longer. The calender says Spring has officially arrived, the weeds and the Lily’s sure seem to know it is here, but the spring time temps have not. I am longing to get outside, feel the warmth of the sun, visualize the colors and sounds of nature and shoot.

I was letting our 150 pound furball of love in this afternoon and heard a couple of crows fussing about across the street. Being curious I went out front to see what the commotion was all about and saw our friendly neighborhood Hawk perched in a tree across the street. I must admit my pent up energy had me running to get the camera and the long lens in hopes that I would not scare the majestic beauty away as I gingerly made my way through the brush to get a closer view and hopefully some shots.

The crows scattered, but the Hawk remained:

It did not seem to be phased at all by my presence. I even made some extra noise to get it to turn its head into the frame. As I moved around to find the best angle through the branches and brush, it did not flinch. 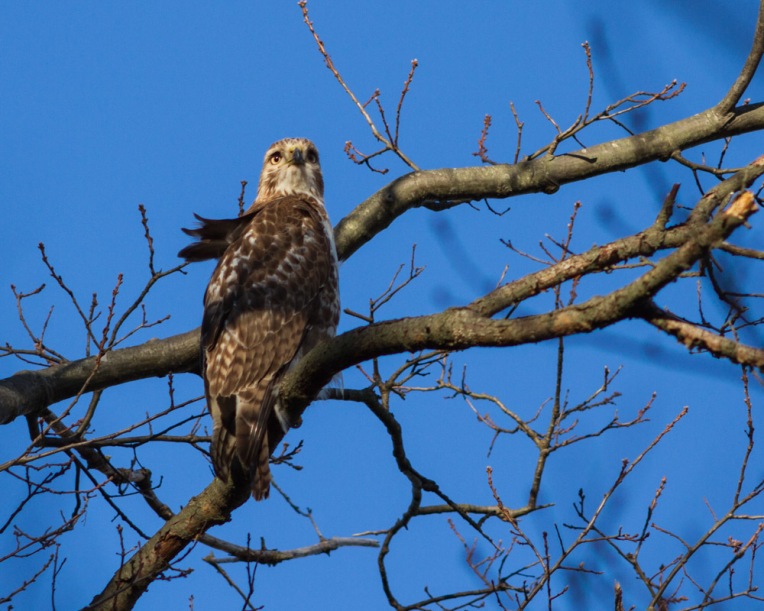 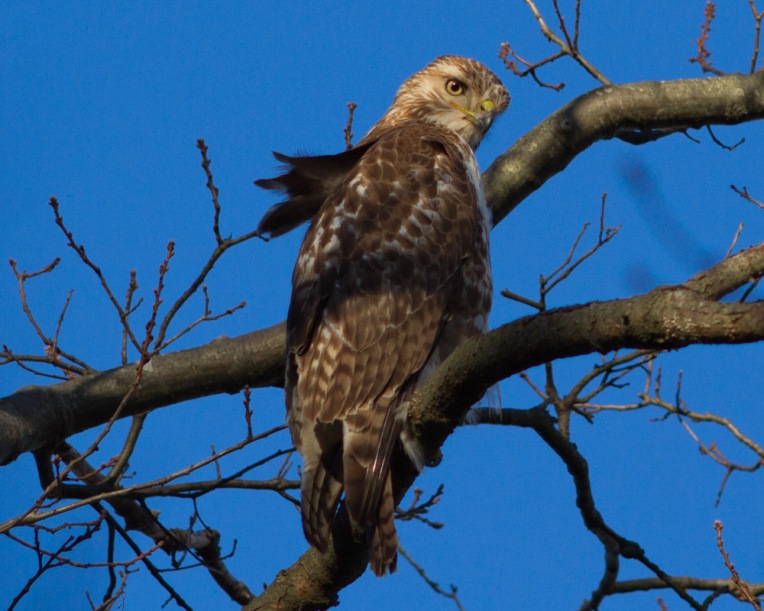 Making my way around to its side, up a tiny hill and through some thorny bushes, shooting through some small branches which provide only a slight distraction in the frame I managed to get this shot which is a set up for the next picture. This is the uncropped version: 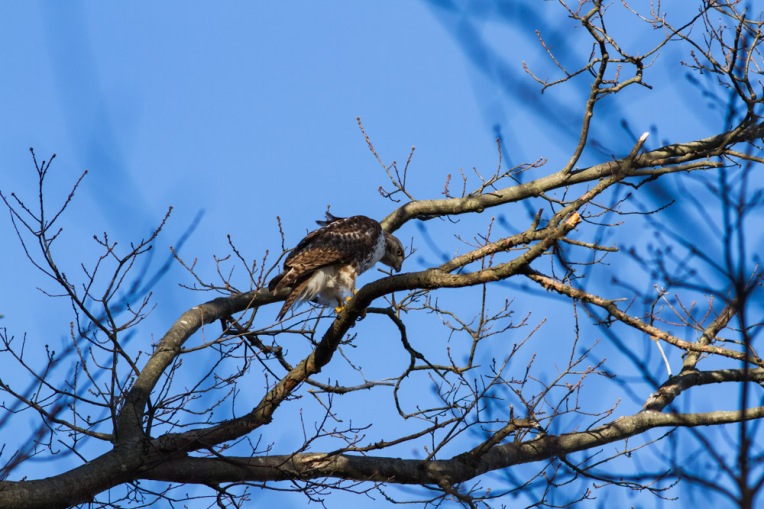 To put things into perspective, I was using a 200 mm prime on a 7D. These are at f4, 1/400th, iso 100. I have not really used this lens since October during Sandy. I forgot what an incredible piece of glass it can be. This is fully cropped in. 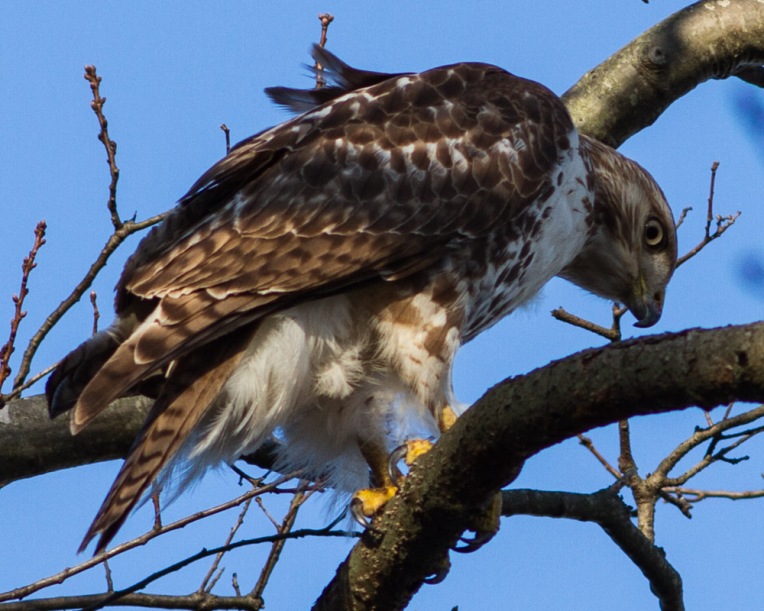 Talons! Makes you truly appreciate how these birds of prey get their food.

I moved up and around a bit closer to see if I could grab a better profile angle. Angle was good but the branch was a bit interfering. l am not complaining though, adds to the natural habitat feel and it was even kind enough to look into the lens in a very quizzical manner. 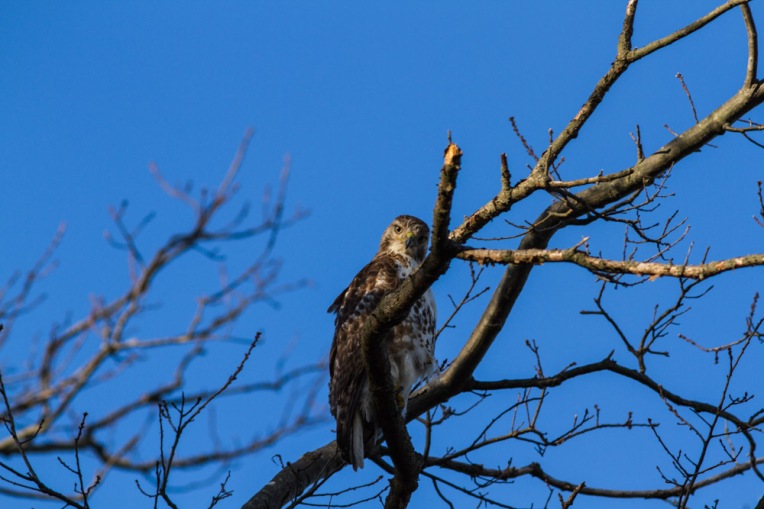 I have been experimenting with black and white recently, trying to find out what works and what does not. Mainly I have just been decreasing the saturation in the photo rather than an actual b/w conversion. Each has its own qualities and in the end I would think it all comes down to personal preference. I tried some different presets, a green filter looked the best but end the end I stuck with the desaturated version. Looks a bit cold and Wintery. 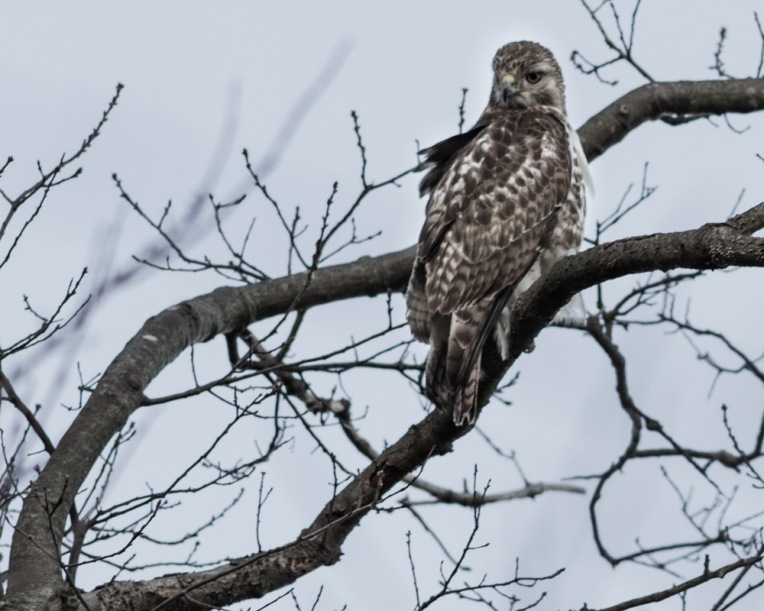 There is a full moon tonight, though I am going to wait till it gets warmer out. Soon enough, warmer weather is approaching!