Hiking along the trails with wife and daughter by my side on our annual visit to the Smokey Mountains was difficult to get going. Rain graced us every day sans two, my father in the hospital recovering from hip surgery, and my wife required to work on Christmas day resulting in a fly down for her on the 26th. My daughter and I along with our 145 pound Landseer arrived at my parents on the 22nd, the first time I ever made that drive by myself. I did much better than expected, only one five hour energy consumed, but like clockwork by the last hour my legs began cramping up. One day of rest before my daughter and I went exploring, in the rain no less. I mentioned in my last post our intended destination was closed so we just took a drive around Little River Road and went stream shopping, for pictures of course. This is a single image processed through HDR software. Just a little experiment I was trying. 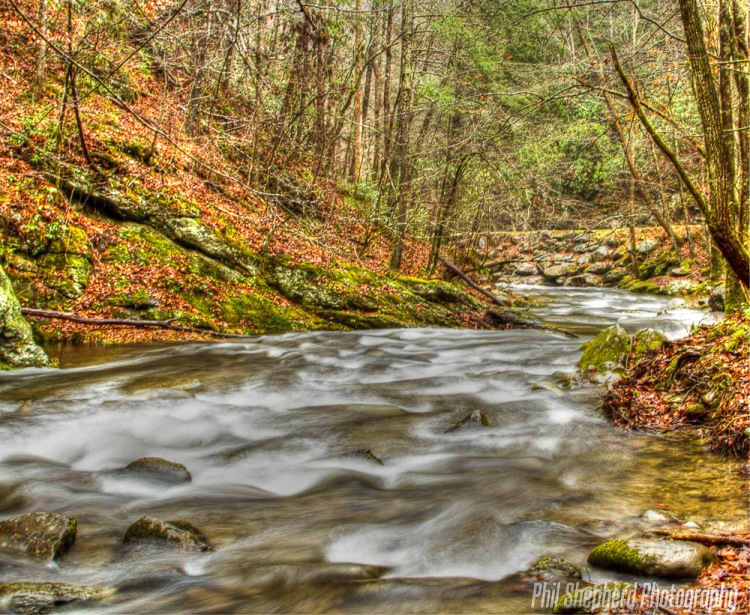 Since I started seriously learning about photography last sping I have never attempted any serious nature pictures. I was very excited for this trip and finally on Thursday the rain subsided and we were able to go hiking to Abrams Falls which is located within Cades Cove. Seems everyone had the same idea because it took us almost 45 minutes to get around the loop to the pull off for the trail head. I did not mind so much because there were many other sights to see during our crawl.

And around every bend and in every field the deer roamed free. There was many a time we saw people in the fields within 15 feet of one, accustomed to the tourists they are. Not sure if that is a good thing or a bad thing. I see deer all the time on the way to work, but this guy had the most amazing face I have ever seen. I was just not quick enough pulling over and getting out of the car. He knew I wanted a shot of him, so naturally he decided to walk away.

We made it to the trail head to begin our five mile round trip hike. There were only a few very rocky sections on the trail, the normal ups and downs associated with mountains and even a few stream crossings, made possible by a carved log, at an angle, with a very shaky railing. Good stuff.

Abrams Falls is not a large waterfall at only 20 feet high but the volume of water coming through is tremendous. This is our first view as we came around the corner. I did not  notice the couple when I took this but dare I speculate that he just proposed and by her reaction she said yes! 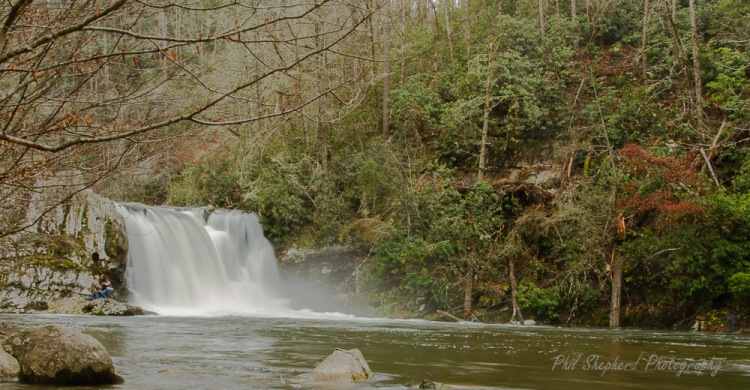 There were quite a few people congregated about and as we got in closer, one large group noticed me with bag and tripod and gave me their camera’s for a group shot. Of course I obliged… as I thought….K, move along time for me to get my shot….

I was feeling the spray on this one, but it gives you the idea of how much water comes over these falls. Truly breathtaking. This was 24mm, 1/4 of a second at f13.

The next day was earmarked for a hike to Laurel Falls. This was a much different hike, the trail was paved and half the distance! Not a bad thing because it kept going up, and up and pavement, although not very smooth, was a welcome respite for our achy calves. All the people we saw the day before seem to once again have the same idea, leading to  two full parking lots and cars along the side of the road up to a half a mile in either direction of the trail head. No worries, a little patience combined with a little strategizing and we secured a spot right next to the lot. We are suburbanites after all, no need to be walking so we can go hiking….

This trail offered a few open views of the surrounding landscape:

Laurel Falls has an upper and a lower section, separating the two is a little bridge and a cliff. I think the upper section is visually more pleasing. Regrettably due to the amount of people present I did not get the exact shot I wanted but this one is the closest:

And the little but very hazardous cliff:

While the upper portion is nice looking, the lower portion is much more fun! Particularly navigating down to it.

I refrained from playing too much on the rocks, lord knows I wanted to, but since my wife and daughter were looking bored topside and probably wondering how crazy I really am, logic prevailed. Besides I think they were growing tired of people watching and needed to get away from the crowds. Meeee too.

All in all it was a great time, The things I learned during my first experience dedicated to nature photography:

You should always check to see if your ND filter and Polarizer are in the bag before you leave, and when you do have it, you should take the time and use it; IS really does work to at least three stops; two second timers are great but I think the remote release is better….especially when people are milling about; that I should go to some spots in the state where I live, when it is sunny, um, less cloudy. We have so many beautiful areas here I need to take advantage of them. Oceans are one thing, but woods and mountains provide a totally different experience  I also have decided that it is time for some workshops so I can work out some of the finer points of this adventure.

Thank you for stopping by! Till next time…