Back at the end of January the company I worked for gave every employee notice that as of April 1, 2020 we would stopping all field operations and begin dissolving the entire corporation. Most were let go then, the rest of us would endure staggered layoffs until the end of the year. I received an April 30th date, so what do I do? Book a 10 day trip between New Hampshire’s White Mountains and Maine’s Acadia National Park for the beginning of May. After 24.5 years, a vacation without worrying about 500+ people sounded good to me. Solitude, Peacefulness. Uninterrupted time away. Uninterrupted. Time away.

Ha! So much for that. The back half of the trip to Maine was canceled. Of course I waited as long as possible and let them do the canceling, I was not going to pull the plug. New Hampshire was still a go! I had the time, let’s put it to good use.

It was a little early in the season but what the heck right? Less people and no crowds, little did I know when I booked it what would ensue. It was weird, but cool, staying in a motel for 2 nights and being the only person in the joint. The third night another body arrived. A friendly hello exchanged and that was that.

Snow covered the highest peaks, not much I could do there. Wanted to hit up the auto road, nope, still quite covered under snow towards the top with more on the way. Quite a few trails I had plan to tackle were closed for maintenance. Something about mudslides and uprooted trees. Spring thaw indeed. K, so next time plan during summer/early fall. I still have a remaining bucket list of things to do and see, perhaps turn into a leaf peeping trip in the fall.

I arrived into town around 5 pm on a Tuesday, saw a couple spots for a potential sunset on the way there, checked in and headed out. Sunsets around these parts is a bit rough with all the mountains. I did not see any at all color while I was there but she sure was pretty watching her disappear behind the mountains.  These are from the side of the road on the Sacco River, near Conway.

Wednesday would be a full day as I headed out to explore the 34 miles that make up the Kancamagus Highway. My primary objectives were waterfalls and other bodies of water that project downward. There are stated to be around 100 waterfalls in the region, with many more flumes and gorges littered throughout. My first along the highway was Lower Falls, located along the side of the road. No hike needed. This is a focused shot on a particular area of the falls. It actually extends quite a few more feet downstream before dumping into a general area frequented by swimmers in the summer when the turbulence is not a high.

A couple miles down the road was the Upper Falls.

A close up and a pull back. The difference in a two second exposure and a 1/10th of a second exposure. I am still more fond of the longer exposures overall, but these shorter ones do provide a little more feeling and a better understanding of the speed at which the water is moving.

Next up was Champney and Pitcher Falls. This one turned out to be the only real hike during my stay, covering 3.5 miles round trip. A few stream crossings made it interesting, and I still dislike when things go up <Sea Dweller>. I did take a few 60 second breaks after some of the inclines and was very pleased I can still recover quick.

Set to the side, off in a little ravine was Pitcher Falls. This combo was very beautiful to see and well worth the effort it took to get there. 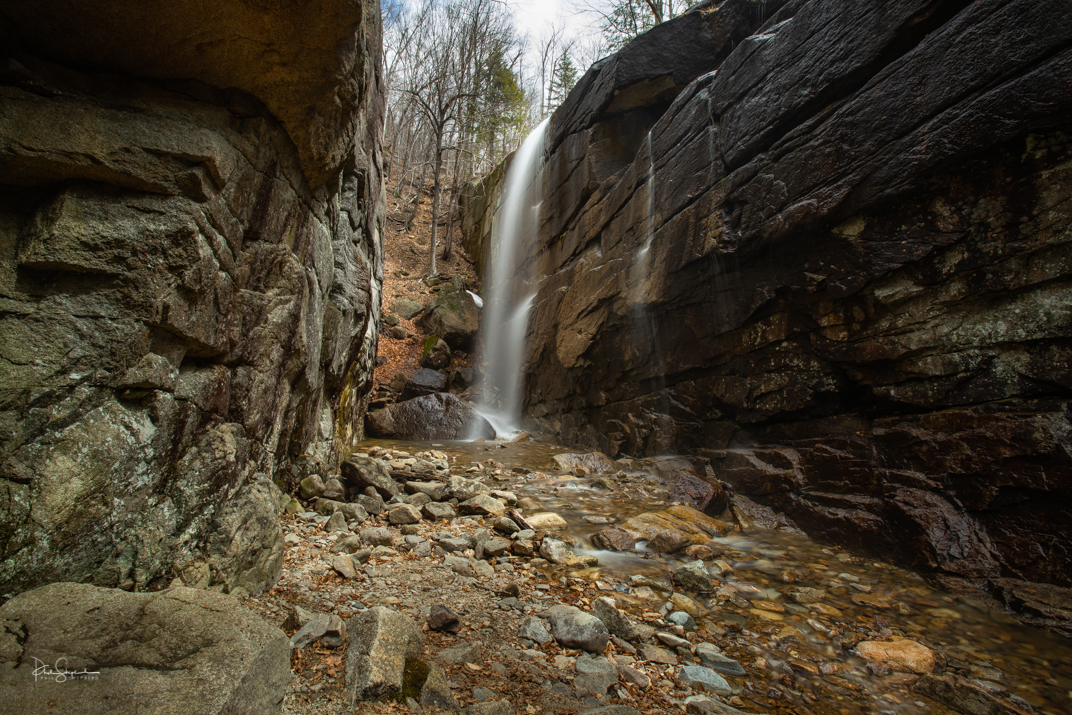 Just down the road was Sabbaday Falls. A short hike only to discover the wooden stair case of a viewing ramp was closed. Despite my best efforts there were no compositions to be had at the base or the top. Could I have gotten a shot I was happy with? Most Likely, but you gotta respect the NPS signs that say do not cross these locked gates. And if I cannot view it on a wall, not pressing that button. What I did find however was a nice composition of boulders just above the falls. I was not looking for river shots at all but this one spoke to me.

The Lost Gorge is one of those major, charge admission to, attractions in the area so I knew that was closed.  Beaver Brook Cascades was closed as well, this one for trail trouble. I was bummed about this one. So, I headed over to the Basin to check it out. This is right on I-93 South, which I thought was wild. A short jaunt into the woods and an area full of cascades to be had. I would imagine this is incredibly popular destination during normal times. So easy to access, and so impressive the way the rock faces were cut in a smooth circular shape. 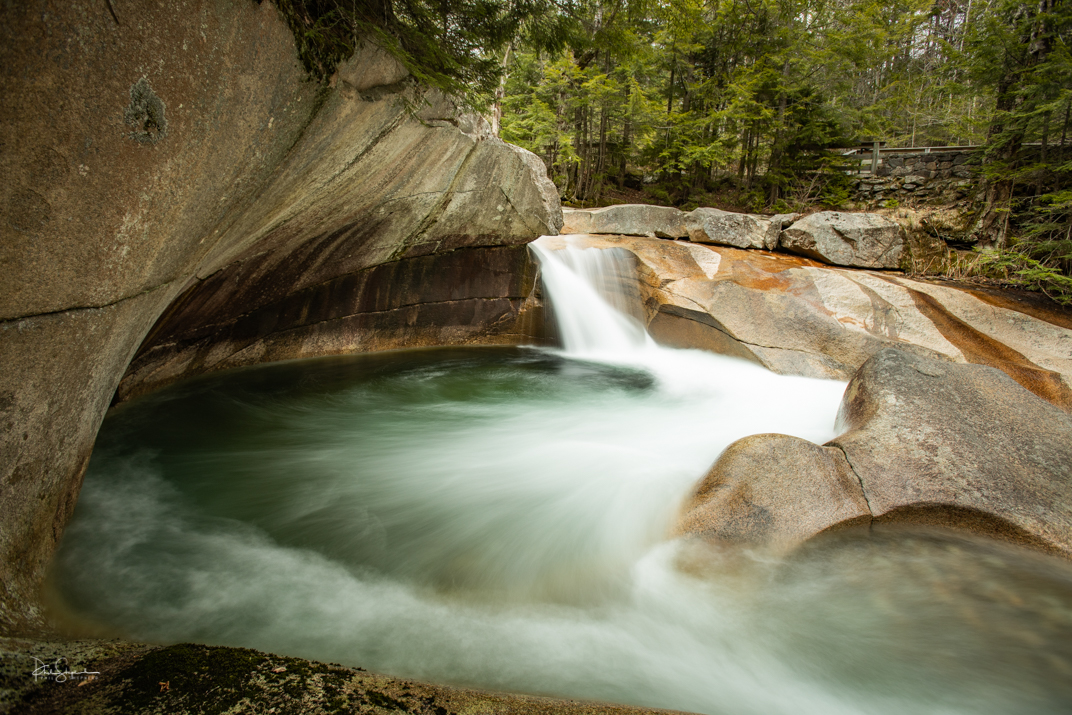 Just up the trail is a less traveled location called Kinsman Falls. I imagine during warmer weather everyone stays and plays in the water at the Basin and this does not get much attention. Fine by me.

With day one in the books, my legs were trashed. Day two proved to be, well, not as productive as day one. The Pinkham Notch section was pretty much shut down to due trail maintenance. Sounds like they got hit hard. Did a bit of driving and the next location I had marked out seemed a bit sketchy so I blew that off. Did not like the feel of the area. One more I had earmarked I could not find so while I was striking out for various reasons, I was enjoying the drive. The opening two shots of this page were from day two so I remained very content with the catalog I was building. After making a loop around the area, out of nowhere I saw a sign for Ripley Falls. This one was not on my list, I pulled over, looked it up and figured I would make something happen.

0.6 miles of uphill, leg killing, seemed much longer than it actually was, roots, rocks, snow and mud stepping love ensued and I cannot find a composition I am happy with. Well, not actually true. I had one only there were a few distracting tree branches in the way so I ended up here:

After this I knew I was shot, legs were done from not enough walking and I was getting real food hungry so I just kept driving. This is just some random photo of the mountains from a Scenic overlook. Cool sky but the lighting was flat. Everything is still in cold weather growth mode.

The only time I used my crop camera on the trip was for this shot of Mount Washington. 7 images, 640 mm. The only problem is it is only 19 ” tall. I should have doubled up. Live and learn, educate and grow. Time to plan some day trips before I go back to work.

Thank you for stopping by. Stay safe, stay positive.

Capturing my interpretation of this world and its inhabitants... I am a Headshot and Portrait Photographer and supporter of Live, Local Music. This offering is dedicated mainly to Mom Nature and the travels I indulge in with her. View more posts

One thought on “Socially Distanced in The Whites of New Hampshire”